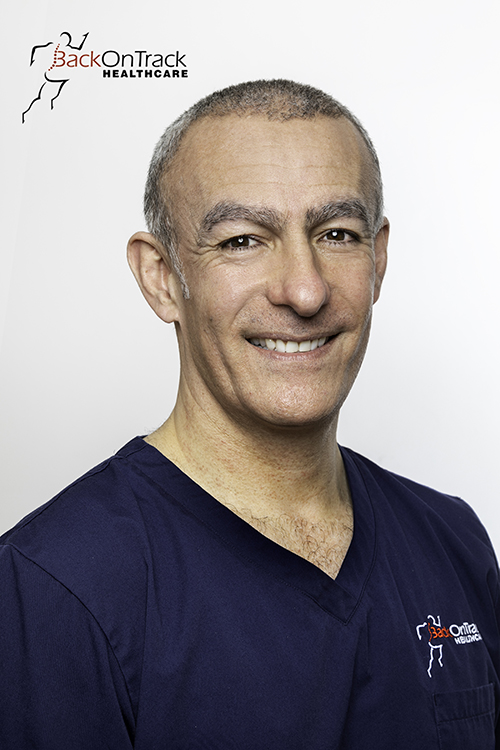 If not at Back on Track Healthcare you would find me enjoying family time, dog walking or struggling up the Surrey Hills on my bicycle!

113568
If not at Back on Track Healthcare you would find me: enjoying family time, dog walking or struggling up the Surrey Hills on my bicycle!
Schedule Appointment

Kieran began training as an osteopath over 30 years ago and qualified through the world-famous British School of Osteopathy (now called the University College of Osteopathy) in London where he since became a senior lecturer – regularly speaking at various osteopathic colleges throughout Europe. Since graduating, with his Honours degree, Kieran has followed his passion for travel and looking after sports people, by working overseas in Auckland, New Zealand, and in the ski fields of Courchevel in the French Alps.

Kieran founded the practice in 1995 and was later joined by his wife and fellow osteopath Emily. They both practice osteopathy at the three main clinic sites in Wimbledon, Cobham and Woking.

He is passionate about good healthcare for all and in patients taking responsibility for maintaining health, fitness and nutrition to allow them to live the life they want. He offers treatment for a wide range of musculo-skeletal complaints and has a keen interest in the treatment of sports related injuries, having supported elite athletes in a range of sports such as professionals from Fulham Football Club and AFC Wimbledon, tennis professionals competing at the Wimbledon Tennis Championships, but is just as happy treating the weekend warriors and any that are keen to train to keep fit and healthy, from elite to recreational level.

Kieran’s interest in the treatment of sports related injuries comes from his own interest in sport. He competes in Iron Man events, adventure races, long distance swims and in recent years has been developing the rugby skills of children at his local club in Cobham, Surrey.

Kieran works with a range of issues including:

What patients say about me:

While there is no longer a legal requirement to self-isolate, it is still recommended that those feeling at all unwell or those that have had a recent positive test of Covid-19, avoid contact with others and stay at home. Within Healthcare settings, there is no change to the infection control guidance, which advises the use of PPE by healthcare practitioners and patients encouraged to wear face coverings. Our staff will continue to wear theirs to protect you. Please wear yours to protect them. Thanks for keeping our clinic safe.